I think that I have written enough about Evernote, but for this article, let’s just keep it at that I use it as my digital filing cabinet. Wunderlist is a to-do-list app, which you can use to keep track of your to-do’s and share them with others as well. Trello is more of a project management application, based on a Kanban Board, I am using it to see if it useful for planning projects. Google Calendar, well, that is basically what the name says: a calendar. It has my appointments in it, and such, which is what it is made for. Dropbox is well-known, I would assume, but just in case someone does not know it yet, it is a file-syncing service, which puts your files in the cloud and makes them (readily) available on every device you have installed Dropbox on.

The “problem” with having different tools is exactly that: they are different tools, from different makers, and there is no integration between them. You might wonder why this is a bad thing, but, for me, it boils down to the fact that when I create a note in Evernote, I might want to link it to an action in my Wunderlist. Or, as Evernote lets you create reminders, they should be added to my calendar and/or Wunderlist. Perhaps I need to have a link between my Dropbox and Wunderlist, as the To-Do involves a certain document. At the moment of this writing, there is no such link between the apps. 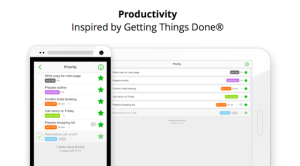 And then I stumbled upon Nozbe. I do not even remember how, but it might have been through a Lifehacker article.

Nozbe provides integrations, which means you can add an “interface” between certain apps, such as Evernote, Google Calendar and Dropbox (or Box). Basically, this means as much that when you create a new task in Nozbe, you can have this added in Google Calendar, so you will know when it is due, and you can add a link to note in Evernote or a file in Dropbox. Additionally, if you create a note in Evernote and you add a reminder, Nozbe will recognize this and automatically create a task from it (and set up an appointment in Google Calendar, if you have set that up).

This was pretty much the feature that I was looking for in other apps, and after trying Nozbe for a month (for free), I decided to sign up for a year, so that I could continue exploring this way of working.

I must admit though, that I am not fully using Nozbe to its fullest capacity yet, but that should work itself out over the coming weeks.

Now, naturally, there are some things that I am not too keen about in Nozbe, and the most “annoying” one is that there is no way to get an overview of ALL your tasks, which can be annoying if you have multiple projects set up (like me). I am hoping that they will fix this in a later iteration of the app.

The other one, being able to share projects, seems to have been fixed in the most recent iteration of the app, so that is no longer an issue.

Coming back to the other tools that I was using, I am currently most inclined to “drop” Trello and Wunderlist. The first one because I can not really get into the Kanban way of working, and the latter because having two To-Do list tools is exaggerating it. However, since my significant-other is also using Wunderlist, I need to try to get her to switch 🙂

I will try to make some new posts about Nozbe every now and then if I run into issues, annoyances, or if I find out about a really new cool feature. Some sort of an ongoing review, you could say.