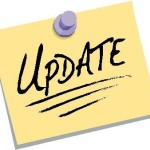 Anyhow… I finally got around to actually doing something on the site. Over the past weeks, I have been adding galleries and an article or two, one of which is basically the combined blogs of when we were doing work in our apartment, and the other is the blog that I did from our holiday in Canada in 2012.

About the article on Canada: it’s been sitting in my Evernote since, well, basically since we came back from Canada. All the time, I had the intention of posting it to my site, but never really did it. Mostly because of a lack of time, but also every time I saw it, I saw how quickly jotted down some days were, and I realized that I would have to change that a bit. And finally I did, however, I do realize that some parts of it are not really proper sentences, but hey, it gets the message across.

I hope to get some more blogs out on a kind of more regular interval, but we’ll see how it goes.